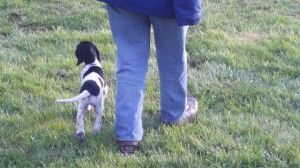 We decided it was time for Zwei to begin fulfilling his role as chief distraction and functioning working partner, starting with our 8 am appointment.

Our Thursday morning regular is a young Lab mix named Murphy. Murph is a great dog, although his enthusiasm is a little difficult for his senior owners to accommodate on occasion. He is a  big pup with a lot of go. His owner is a bit on the small side and finds his attraction to other dogs pretty overwhelming.

Murph and his owners are getting ready to matriculate out of private lessons and start joining us for our Guerrilla Dog Training meet-ups throughout Carroll County and the “preparedness” lesson is to see exactly where the dog needs work around contrived distractions in a controlled setting.

Zwei is a perfect distraction.

Our garden area is a 1600 square foot fenced wilderness of weeds and rocks at the moment. Thinking of the pups’ safety first, Zwei and my husband were in the enclosed area while Murphy, his owners and I, worked outside the gate.

Since Zwei’s initial contact with strange, non-Pointer looking dogs his first day here was a big cultural shock to him, I worked Murph far enough away for Zwei to be unencumbered by his presence before I moved in closer to the pup.

I needn’t be too concerned. Zwei saw him from a distance of about 40 feet and after looking at this giant of a dog, ran up to the fence for a closer look. Murphy, on the other hand, needed a bit of work for his smallish handler to get under control. I guess adorable puppy cuteness is contageous to dogs as well.

It wasn’t long before Murphy learned that access to the pup came through self control and he worked successfully at heel, stay, a few distraction recalls and square finishes to the front before allowed to break off for a nose-to-nose sniff with His Awesomeness.

Zwei for his part, remained assured and polite.

Later, Zwei got to see his friend Dave Cochran and guest, Carol Blesh. Dave enticed him into a game of tag and Zwei was happy to comply. Although my stupid phone recorded the whole thing, it didn’t see fit to preserve it and somehow I corrupted the file so it would neither upload nor play.

This pup loves to tug, so Dave was happy to supply a few tug toys for Zwei to latch on to. Since he is still learning to cooperate, exchanging toys or “trading up” is still not part of his retinue. Being a pup, he loses interest pretty quickly, so even a selection of toys were sufficient only for a while. The concept of tug has to be carefully constructed so as not to develop any bad habits, and I didn’t want to get Zwei into a cycle of possession or the ‘coveting’ of objects inadvertently.

As soon as Zwei began to lose interest he headed for the water bowl, which is the first critical indicator of his developing memory.

We keep a water bucket on the back porch to refresh the dogs coming in from work and Zwei has access to it every time he exits or enters the house. Since he has free access to water, his interest in the bowl on the porch is fleeting, but over the last four days he has taken drinks from it. He has traveled to it from the bottom of the hill, where there are visual reminders of it’s existence, but today was the first time he traveled purposefully away from us, from the entrance into the large field, across the bottom of our yard, around the garage, up the hill and to the bowl.

It doesn’t sound like much, but it’s a pretty significant expression of his ability to retain information about his environment and use it to acquire resources.

Over the course of our first 4 days together, we have learned much about each other. Zwei loves to tug, he does “sad face” very well (especially when he is cold, which is often, since our little spate of unseasonably warm weather seems to have come to an untimely end) and he is overjoyed with the prospect of gnawing on Peters’ feet. Regardless of what shoes he may be wearing. He is ambivalent about food, and loves to chase people. Because people have feet.

Zwei is learning that people are trustworthy, they offer warmth and security and they are pretty fun to be around. They have cool toys (feet) and they do silly things with them (run away). He has no preconceived notion about his world. We keep things short and simple and he is encouraged to be successful. We do not require precision, but we do not reward (nor punish) poor choices. We do not beg, cajole or wheedle. We are direct, and we are sincere.

And when we cut his  nails this afternoon, it was a mere matter of providing a nice warm lap to sit on while I made quick work of those  16 puppy toes.

Our friend Peggy Klosek came to visit later in the afternoon, and Zwei charmed her with his adorableness. Peggy added yet more Total Stranger currency and Zwei thought her especially charming. She had great feet. Shiny white shoes with LACES!!!

His interactions with people are becoming bolder. He chooses our company more often than not and we have provided him with instructional entertainment. Although some folks will question my permitting him such a fascination with feet, I am building on the principle of exploiting normal puppy behavior and his attraction to the pursuit of feet, to help build a very important concept in his young life.

To follow feet. The very first, primitive step towards a solid heel.

Zwei is learning that feet pay big dividends. Stick with feet and good things happen. It is not too difficult to provide him with a transitional reinforcer like food, (once, if, he develops more interest) or a favorite toy. Obviously, redirecting him from his fascination with our ambulation onto a far more tangible reward is important, but remember it is far easier to get a dog to do what he wants to do than it is to make him do what he doesn’t!