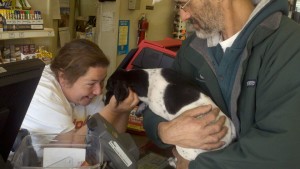 It helps that our son Conor doesn’t go back to school until Wednesday. He was also very enthusiastic about being Zwei’s caregiver overnight for his very first night in his new home. We organized Conors’ room to accept his new guest much to the dismay of Goth Cat. She quickly removed her perturbed little self and sought accommodations elsewhere.

Before my husband and I retired, Peter remarked that if Conor had to take the puppy out in the middle of the night, he hoped that the boy wouldn’t lock himself out. I responded that sometimes lessons are best learned first-person, and even after warnings to remember about the door, just after settling into the cool blankets and closing our eyes, Butter warned us that someone was “at the door”. Pretty soon, every dog in the house made sure we got the message.

Conor stood rather unhappily at the door with the pup squeezed against his naked chest as his father let him back in. When I heard them making their way down the steps a second time, the clock read 6 am.

They were going back to bed just as we were getting up and a part of me wonders if Conor will retain his enthusiasm for his new pup tonight.

We had some errands this morning so we popped the pup in the truck for our first big adventure.

I had to be careful; he’s only 8 weeks old after all. I had to select our destinations to mitigate risk of exposure to the “wrong environments”. He is not leash broke so we had to pick places where we could carry him without issue. We also had to select locations not far from home. Many short runs are far more productive than one or two intermittent “long” ones. Since all of our destinations were within a few miles of the house, the stop-start nature of the trip would be a nice little diversion.

Our furthest destination was the bank which is where we started. I have taken many of my dogs-in-training there and I knew that Zwei would be welcome. Of course people gravitated to the cute pup in my husbands’ arms while I conducted business. Folks were polite enough to ask for the pleasure of petting him and Peter was careful to gently instruct on the appropriate greeting behavior to a dog-in-arms. The socialization currency was tremendous. Several tellers leaning across their barriers, the glass walls of the executive offices, the electronic doors and the mid-morning traffic netted about 7 total strangers on his very first outing.

Next was the Feed Store and it’s “Chick Days” display of peeps and young girls all squeeing over the new pup. I love this place. I have shopped here for years, my dogs are welcome and all of the employees are well versed in appropriate conduct with strange animals. Unlike the majority of PetBoxStore employees, these young folk have a clue and handle themselves respectfully.

We switched roles as Peter retrieved the feed, I handled the pup. The travel was already wearing on him and I figured he needed a pick-me-up, so what better treat for a bird dog than birds?

I knelt near the lowest stock tank filled with peeps and allowed Zwei to fill his nose and his eyes with the noisy little puff balls. It took him a second to perk up but once he did, he was all eyes and nose and ears! Carting him away to pay for the feed provided the additional experience of polite young people, a spattering of toddlers ogling the chicks (the baby birds, not the feed store staff) and their parents. T.S. currency increased by 3 pretty girls, two adult men, two little girls and all those chicks.

Our final stop was the fuel station and a quick trip indoors to visit the cashier. When we pulled up, a young coupe with two young children of their own stepped out of the car next to us. T.S. currency increased by two more women, a man and two more children for a grand total of about a dozen women, about 4 men and 4 kids. And a bazillion mouth watering baby chicks.

All in about 40 minutes.

It’s not that hard to create socialization scenarios. Every community has at least a few places where heavily supervised, mannerly pets are welcome. In the span of a day, this pup has met almost 20 Total Strangers, had been inside three different establishments and encountered travel and all of the noise that it entails. He observed human patterns of speech, movement and dress, the bonus of a foreign species (In it’s infant form. Zwei and his litter mates were raised around chickens in their adult form) and (heaven forbid) riding shotgun in a moving vehicle for the duration of his journey.

Now, rinse and repeat. At least three times a week, being careful to avoid areas with heavy dog traffic where health screening is not monitored (like organized dog parks or any public area where dogs frequent). Think of the places where you have seen pets, like the hardware store, the garden center (most will let you bring your pup if you are polite and ask first) and the breezeway of your favorite shopping center (usually an area where coffee shops set up tables and chairs for shoppers).

Although socializing your new puppy with other dogs is of equal if not greater importance, it is essential to remember that pups can inadvertently be exposed to contagious diseases and care must be taken to avoid potential exposure before your pup is fully immune. Supervised visitation with a stable, mature dog is always preferable to turning your pup loose with a group of dogs representing a variety of ages and social experiences. Nothing can damage a young dogs’ impressions of his own kind faster than being subjected to the inappropriate behavior of another under-socialized dog or dogs from the misguided notion that they will “work it out”.

Remember, the few minutes you spend daily socializing your new puppy to all the wonderful things that will comprise his world as an adult, go a very long way in creating the well-adjusted, mannerly companion you have always wanted.