My dog is driving me crazy! 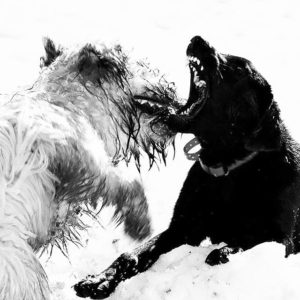 Drive. It’s a hot-button, poorly understood and frequently misused word in dog training. Dog trainers talk about building drive, channeling drive, switching drive, engaging drive, all sorts of things that simply determine what the dog is internally motivated by when he engages in an act.

Although understanding drives might be important to trainers, what pet dog owners usually want is to suppress or inhibit drive. They don’t want to engage it or enhance it. They don’t really want a dog that vibrates with anticipation at the mere suggestion of activity.

Most owners want dogs that are mirror reflections of themselves. They want a dog that’s active enough to keep up with their weekend warrior-ing, and as low maintenance and comfortable as their favorite pair of boots; comforting and familiar when they are on, taking up little space and inert when they are off.

Most dog owners are not professional trainers either. Although all pro trainers are *usually* dog owners, some may not be, and I kind of look sideways at those folks. I mean, how can a trainer be without a dog? That’s sorta like a chef without her own cutlery.

A lot of inexperienced, newer trainers tend to have gotten into training because they owned a dog that drove them crazy. They figured that since they started with a drivey dog, they can train any dog. Every dog is nuanced and requires that we not only understand them, but that we know enough about instinctual drives to be able to help them. Learning how to manipulate every drive successfully should be every trainers’ goal.

Experienced trainers deliberately get high drive dogs because they wish to pursue a sport or activity where that kind of dog is desirable.

Drive is defined largely by instinctual or internal motivators. Defensive drive, prey drive, social drive and hunt drive are the 4 basic drives that facilitate survival. The ability to look for and locate game would be hunt drive. The desire to chase and kill game would be prey drive. An animal willing to fight in pursuit of a meal, a mate or territory, could be classified as defensive drive, and the desire to seek a mate, procreate, and hunt cooperatively with a group would be considered social drive.

The only drive most dog owners actually want in their dog is social drive. The companionship a dog offers by his mere presence is what most humans seek. They may admire dogs that display strengths in the other three drives, but most owners are inadequately prepared to control them effectively without professional intervention.

Having a dog with a lot of drive can be a blessing or a curse to an owner. As I age, I am less inclined to own dogs with a lot of prey, hunt or defensive drive, because although easy to motivate and fun to train, they can be difficult to challenge meaningfully over time and even more difficult to exhaust, mentally. A highly social dog can present his own problems, but he is largely content to just be with his owners.

A person looking for a dog needs to ask themselves how hard they are willing to work in order to maintain their dogs’ heritable drives. It’s work! Life happens! Priorities change! That cute little yellow lab you bought down the shore was bred to hunt. Are you prepared to give that dog a meaningful job for the next 8 to 10 years? That Shepherd needs a job. There are ordinances against sheep or cattle in urban areas, so… what’s the plan?

High drive dogs are demanding. When their needs are not adequately met, they become obnoxious. Some can even become dangerous.

Everybody loves the romance surrounding the dogs they see in movies and on TV. What they don’t see is the work involved in making that dog perform those feats of derring do. When a person says “I want a dog JUST LIKE THAT”, they aren’t aware of the work a dog ‘just like that’ requires.

Puppy buyers start with the best of intentions; their grandiose dreams of the next Hero Dog usually end about the time their puppy has eaten it’s way through several pairs of shoes, a crate or two, and all the baseboards in the kitchen.

That can be construed as UNdirected drive.

Maybe the puppy gets enrolled in a generic puppy class, where the misguided focus is on “socialization” instead of channeling that drive, so the owner is never taught how to control that drive effectively and encourage more pro-social behaviors. Dog starts lighting up on guests, becoming defensive around food or space. That would be called MISdirected drive.

If the owner is smart, they contact the breeder for advice. If the breeder is respectable, they will give it or tell you where to look for it. In my book, a respectable breeder wouldn’t sell a novice owner a dog with high drive to begin with, but that’s an article for another time. Breeders of top quality dogs with high drives aren’t selling their best dogs into inexperienced pet homes.

Some folks don’t get their dogs from breeders at all. They get them from alternative sources like Craigslist. Petfinder is another, or as I have heard it referred to, Tinder for Pets.

A lot of the dogs that end up in those places can be categorized as having had too much drive in their previous homes, which landed them on the “available” page of some animal specific aggregator like PetFinder, a rescue, or the local shelter.

Their behavior became intolerable to their previous owners, who ultimately became frustrated with them and gave up. Dog ended up stuck in a crate, in a back yard, sequestered away when company comes. As his life becomes even more unfulfilled, he becomes a nuisance and potentially a genuine risk.

Predictably, dogs with a lot of un-directed drive tend to get dumped first. Usually the owners discover their mistake too late (that the Husky they had to have because Game of Thrones was their favorite show is a nightmare screamer who is destroying their landscaping) because their only criterion for consideration was the dog would be a nice ornament to their lifestyle.

People buy dogs for a variety of reasons, most of which are reasonable. People usually want a companion, not a project, and when the dog starts to bloom with it’s genetic predispositions for certain behaviors indigenous to the species and specific to the breed, owners become confused and frustrated. They didn’t bargain for that. They want dogs that look the part, not actually act the part.

They never realize that a dog with a lot of drive requires a lot of effort.

Then come the armada of dimwitted self-proclaimed ‘experts’, all of whom are more than happy to show prospective owners their high drive dogs of super popular breeds, engaged in a variety of behaviors that the average pet owner may find entertaining but entirely impractical.

Having a dog back it’s ass up a tree is hardly a practical skill when the prospective client is dealing with a crack addled bully breed pup that plasters guests with a barrage of barking and other behaviors that showcase his adolescent insecurities.

Showing a dog sitting on tiny, irregularly sized and shaped perches, or brief, erratic vignettes of what the handler thinks looks like crisp, stylized obedience routines by their Hero Dogs participating in their favorite disciplines, but end up looking more like a panting coke addict in a 90’s dance club trying too hard. That isn’t what most dog owners want.

Being able to retreat on command is useful. Settling into a spot and remaining there is too, so why trainers don’t demonstrate relaxed, emotionally neutral behaviors from their personal dogs is vexing.

If I were a consumer of dog training, I would look for the trainer with the dogs I want mine to be like. The ones that can operate without leashes, collars, lots of wordyness… but that’s just me.

Every trainer involved with dogs has a different training philosophy, a lot of which is an unclear understanding of drives and how to manipulate them.

I hear new trainers prattle on about ‘engagement’ as if they think every owner walking their dog to the mailbox should look like the heel routine of the performance dogs of the annual National Championship. Aaaaand, no. It shouldn’t. It can, but the average owner should not be expected to demand that sort of focus from himself, let alone his dog. Yes, heel does mean heel, but expecting an average owner to be able to understand and maintain that level of focus from their dog is unrealistic. Owners want dogs to ignore distractions. They do not want to have to continually ‘engage’ a dogs’ attention in order to maintain a focused, stylized heel for their evening stroll through the neighborhood.

Tying value to work is nothing new, and this nonsense that the dog can only function when it’s dumping endorphins is ludicrous. The reason most people call trainers is because they either own or are quickly creating adrenaline junkie dogs and need help learning how to correct that.

Dogs don’t mean to drive you crazy, but it’s important to remember that what you allow will continue. Learning how to manipulate drives are what most successful dog training is all about.

When the behavior your dog is engaged in is the result of that underlying motivator called ‘drive’, learning how to inhibit and redirect that drive is the difference between that dog driving you crazy, or you driving that dog to the shelter.