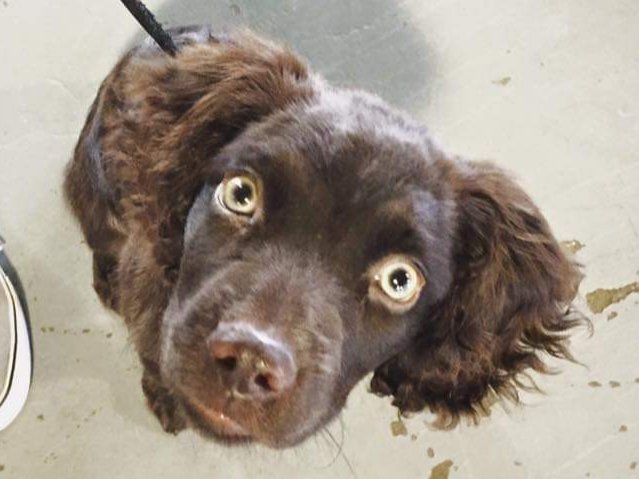 Are you rewarding chaos or calm in your dog?

A nice woman wanted a companion for herself and her busy family. Something smallish, easy to groom, easy to keep.

This wonderful lady became my client not because the pup was ‘bad’, but because they wanted to get started on the right foot, and my name comes up a lot when it comes to puppies and training.

We met when this pup was about 9 or 10 weeks old. Typical spaz monkey puppy- a little wild eyed and slow to settle, but nothing outrageous or uncommon for either the mix of breeds or the behavioral age range.

She was typically mouthy and active as only pups that age can be. Barely leash broke, slippery when handled physically, inclined to respond with protest behaviors like mouthing and pawing; throw in a few yowls and growls and you get the picture.

We walked through the basic strategies of common-sense puppy raising, from appropriate confinement to desensitizing the physical handling issues necessary for all dogs- nails, teeth, eyes and ears; talked grooming practices, housebreaking, feeding frequencies and other topics that round out our puppy rubric.

Weekly visits marked progress in varying degrees, which were symbolic of both behavioral growth, emerging autonomy, and lack of consistency in handling practices. There were other members of the family, each with various levels of influence on the dogs’ behavior or training, and the pup’s acquisition was timed precariously close to a protracted family vacation where she would not be included.

The caregiver that would be responsible for the dog while the family was on vacation came for a lesson. We simplified strategies to keep the training momentum headed in the right direction while the pup was in alternative care.

About 3-4 weeks from the pre-vacation visit (pup is about 16 weeks at this point), we schedule a follow-up appointment.

The woman was almost in tears. Since their return from vacation, this pup had regressed considerably. Her behavior was characterized as if she had gone from at least fairly civilized to a wild, unruly animal. She was mouthy, she was a screamer, she was impossible to walk without pulling, didn’t listen, prone to bouts of tornado-like destruction and she was becoming a pretty serious housebreaking problem as well.

We reviewed the material we had previously covered, addressed specific habits that were emerging in both frequency and volume, and rescheduled for a lesson the following week.

There was something clearly missing. Outside of the obvious lack of follow-through from the caregiver while the family was on vacation, I was absolutely sure there was something else contributing to this dogs deteriorating behavior, and when I saw her again, the dog was dramatically…worse.

The woman was crushed. The dog was a raging maniac, and I had some deep concerns.

We were not going to make progress the way we were going, so I encouraged the owner to let me take the dog for behavior remediation. She agreed.

During our behavior ‘discovery’ process, we require the owner to provide a daily breakdown of what the dog does during any given day; where they sleep, on what surfaces, when, what and where they eat, how long they have to consume a meal, when they go out to relieve themselves, are they ‘walked’, turned out in a back yard, played with, etc. Anything that would give us insight to behavioral quirks or emerging issues.

Occasionally owners are vague, but during that conversation you can usually determine what the ‘holes’ are and how to plug them. Being able to observe the dogs’ behavior and studying the information the owners provide, one begins to develop a mental image of the details that might be obscured or deliberately omitted.

When we reviewed this pups ‘average day’, my husband casually joked that they must be preparing for the Boston Marathon.

In an attempt to ‘do all the right things’ according to popular theories, this family had created an adrenaline junkie.

Every waking moment had become a festival of owners scrambling to appease the demand barking, space invading, terrorizing little maniac.

This family had become enslaved to the whims of this tiny tyrant. In the hope that their regimen of exercise and ‘enrichment’ would slow this youngster down, they had inadvertently created an adrenaline junkie that had learned how to make demands of human time and human attention.

Instead of helping this little beast learn how to internalize her own emotional state, they had overstimulated her to the point that not only could she not settle, she made the humans in her life the unwitting facilitators to her constant state of arousal.

Every effort to calm her down had the opposing reaction. She was a live wire in the crate, a linebacker to the door, a gate crasher through it, and a draft horse on walks. She was getting positive feedback for every demand she made, and was being inadvertently reinforced with little or no consequence.

Our recovery strategy was simple, really; reverse the reinforcement cycle by only providing access to reward through calm behavior. Instead of allowing self reinforcement and continual arousal in the face of competing interests, we provided negative reinforcement instead of just waiting the dog out until she volunteered quieter, calmer behavior.

We simply used the leash as a restraint until the pup stopped struggling. She began to recognize that her previous pattern of arousal and frustration no longer served her purpose, so she eventually stopped trying.

Owners were amazed by the dramatic change in her behavior and were easily able to continue the training once they began concentrating on reducing her arousal instead of accidentally reinforcing it.

By denying access to things the dog actively sought as reinforcers, she learned to control her own emotional state. Thankfully, she is quickly becoming a happier, more controllable pet in a much more relaxed household.

The takeaway lesson is that ‘enrichment’ isn’t by cramming every emotional/tactile/visual/olfactory/auditory sensation into every waking moment of every waking day, for humans or for animals.

Dogs are the quintessential game theorists. They quickly extrapolate information from their environment and use that information to control or manipulate outcomes, and this little dog had become an expert.

What you allow will continue. Be mindful of what behavior you wish your dog to engage in when the weather isn’t conducive to 4 mile walks several times a day, and plan for THAT.