A day of discovery; getting to know your pup 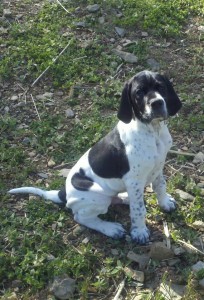 Today kept us largely at home. Dog Training clients in the morning and chores in the afternoon kept me close to the house and to our new English Pointer pup, Zwei.

As I suspected he would, Conor abdicated to spend the night at a friends’ house on the last day of his spring vacation and the pup spent the night in our room. Peter was kind enough to take him out for the final time at around 1:30 in the morning while I nodded in the queen seat until we all finally retired around 2 am.

Zwei woke up briefly around 5:30 and promptly went back to sleep. Yesterday was a pretty big day for an 8 week old pup, as was the day before and the day before that. We spent the day getting acquainted; learning about each other and where our relationship would be headed.

Since Zwei is just entering the most critical period of his early socialization and the recent upset of removal from his litter mates, our relationship is predicated almost solely on the comforts and assurances we provide. He seeks comfort from us since his dam and litter mates are now miles away. Our place is only three and a half acres, which to a 14 pound pup must seem like the Grand Canyon, and is not without it’s dangers.

Every day since his arrival, we have taken him out to roam the grounds and allowed him the latitude to investigate as his comfort level permits. He rolls in the grass and head-chases Peters’ galoshes, but he is still heavily governed by the Laws of Social Attraction, so he does not wander far.

When he was with his litter, there was security in numbers. They ventured in teams or whole groups and as they grew and explored, the security of their numbers became less meaningful and the more precocious pups would act as catalysts to lure their more circumspect brethren further out into their expanding world.

Zwei is neither as bold as several of his sisters, nor is he a shrinking violet. He is curious enough, but understandably cautious in this new, strange environment so soon after his removal from the litter and all the things he knew. He does’t depend on us for direction, but seeks our assurances that his actions are acceptable. We don’t gush over him if he takes a tumble, we con’t chastise him if he doesn’t come to us on the first call. We patently ignore him when he is touring, and praise him lavishly when he voluntarily returns to us.

We have negotiated desirable responses working within the confines of Zwei’s limited understanding of our world while exploiting the memories of his old one. We alternate by manipulating his uncertainty to encourage curiosity and use the lure of our security to endorse it.

Zwei was born in a pastoral setting complete with goats, horses, chickens, beautiful vistas and kind, loving breeders. He was exposed to barking dogs, cats, livestock and tons of people of all shapes and sizes. He was not privy to Jake brakes; large, lumbering tractor-trailers, sirens or a lot of other things that his new environment is rich with. Although I live in a rural setting, our house is relatively close to the road and the spring weather has the farmers moving their equipment from farm to field.

This is both a cautionary tale and critical information for the new puppy owner. Zwei has been here a total of 51 and a half hours. He knows very little about us, although we are imprinting him with memories of our ritualized behaviors; when we rise, when he goes out, who we are, what time dinner is served. Every experience is a new experience and as I explained in an earlier post, great care must be taken that each experience be crafted to achieve a successful outcome.

It’s not that your pup can’t experience consequences for his behavior, he will whether you intend it or not, but environmentally, each moment of every experience should be cultivated in such a way as to encourage confidence and enjoyment.

Zwei has never worn a leash or a collar. He won’t for a few more weeks yet. I prefer to get him accustomed to choosing to be near me rather than forcing him to be near me. That will change when the novelty of the world becomes more attractive and his emotional dependency on us begins to wane. We are careful to carry him to training locations before engaging in any of these exercises to assure safety.

By the time this pup is too large to carry, he will be comfortable with a leash and collar and be a willing participant in our games.

We use a lot of ‘pull’ exercises to keep the pup moving. To encourage a speedy recall as he moves toward us, we move away. Should he venture too far away from us, we chirp or whistle and reward his prompt response with warm praise. Being mindful that we must control outcomes, the areas we select for these exercises are either enclosed or surrounded by natural barriers that provide attractions all their own, but are too much for a little pup to navigate.

Today our recall games were conducted in a 1600 foot fenced area that will someday be a garden. The traffic on the road was compelling enough to pull Zwei away from us on several occasions and I would venture to guess that it won’t be long before he is eager to encounter the big things that travel our road. Without traumatizing him by running him down every time he ventured towards the road, I simply disabled his ability to successfully avoid me.

As traffic passed by, he became accustomed to returning to me on the whistle and to sit at my feet. He was rewarded with a tug of a ball-on-a-rope and a chance to chase a doves’ wing. We are just discovering what excites Zwei and using these things as objects of reward. I am more interested in building his instinctive drives than I am rewarding him with food.

Exercising the growing mind is equally important as exercising the growing body. It doesn’t take much to get puppies tired. A few minutes of concentrated activity and they sleep for a few hours. As soon as Zwei started showing signs of losing interest, we put him up. There are many opportunities throughout a day to show your pup something constructive. Don’t wear him down by drilling simple tasks until he is too tired to respond.

It is important to spend some time observing your pups’ natural inclinations. Does he follow his nose? Does he like to tug or chase things? Will he willingly bring you an item he has chased and picked up? All of these things can be manipulated as training tools or objects of reward. It becomes relatively easy to choreograph scenarios that exploit your pups’ natural talents and direct them in a creative way.