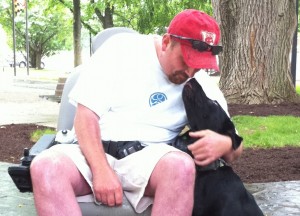 As with all stories, there are two sides to everything:

Service-Assistance dogs enable their disabled owners to function productively in society, helping them with tasks that are outside the physical scope of many; opening doors, turning on lights, assisting them with a variety of tasks that able-bodied people take for granted.

These dogs require a high degree of training in order to prepare them for their lives as Service-assistance dogs, enabling their handicapped owners to lead relatively normal lives and alleviating the need for human caretakers for many day-to-day tasks.

What’s come under fire is the proposed definition of Service Assistance dogs and the conundrum that is created by their use as Psychiatric Service Dogs. These individuals might not quite look like they are in need of the assistance a Service dog provides and even more, the tasks that the dogs provide to ‘mitigate the disability of the owner” are unclear.

Here’s a thought, make access available to all dogs that achieve a level of training that clearly demonstrates they are controllable in public and capable of minding their manners on planes, trains and in automobiles, in Wal-Mart, at the butcher, the baker and the candlestick maker’s.

That way you leave human dignity intact and the ADA properly interpreted and complied with.

But there’s a caveat.

The first: the new language makes the identification of a Service Dog by the ADA pretty vague, since an individual cannot ask the nature of the disability a person my have and second; due to this loophole, people are getting away with faux Service Dogs that are causing a world of hurt for the people who really need the assistance.

Like I said, allow access to all dogs who can clearly demonstrate appropriate behavior in public. The general public can be assured that the animals they see out with their owners at least have achieved a measurable standard of control and the individuals whose animals cannot demonstrate these skills will be excluded from public access. If an individual has managed to actually get certification indicating their animal has passed an access test and the animal is later determined to be in violation, their permit gets revoked until it is demonstrated that the dog can either re-certify; or after a minimal number of re-certification attempts have been made, it is revoked permanently.

It eliminates the posers and the cheats. The people who are blatantly using the loopholes in the ADA Policy can still have an opportunity for redemption if their dogs can pass the access test. It will also help to foster a greater understanding and acceptance of dogs in public, help to enforce current dog leash laws and increase the revenues for localities across the Nation who struggle with funding for pet specific policies.

There are several cities in the United States that have such laws already on the books and there is currently a grassroots movement to introduce similar access tests publicly.

What’s the harm? It can potentially generate revenue for communities and quite possibly elevate the ageless place of dog as help-mate as opposed to the harbinger of death and destruction so vividly portrayed by a contemporary media that is no more objective about animals than they are in their pursuit of any other truth.