Here goes a tongue-in-cheek look at definitions created by the culture of dogs:

There is a Great Divide in dogs today. The interpretations below are based on the context of their use through the ages, dating back many decades wherever dogs and humans found themselves together.

In his book ‘Fetch and Carry; A Treatise on Retrieving‘ by Bernard Waters (circa 1894) the argument was much the same. I can remember these discussions way back in the early 70’s when I acquired my very first dog; an Irish Setter from a renowned breeder in my area. That dog and I spent many days in the field, something that isn’t seen much today, with all that hair, with none of those brains…
Working Dog: a dog that has a job, like hunting, retrieving, scent detection, protection, stock work (more commonly called herding), Service and Assistance dogs, Search and Rescue, even diagnosing human ailments. Working dogs are traditionally bred to a purpose-specific task; their parents were Working dogs as were 90% or more of the animals represented in their pedigree.

They are genetically endowed with qualities that make it easier to teach them their life tasks since they have a genetic predisposition to do so. Working dogs can be but may not be purebred. They are often recognized by performance registries where the emphasis is not on racial purity, but in the ability to perform a specific task well.
Show Dog: a dog that may or may not originally have been bred for a task-specific purpose, is the product of breeding practices that are more focused on looks than performance to a specific task, may be attractive in the way Paris Hilton is attractive (pleasant to look at but vacuous and not a serious contributor to anything of real value), but are considered useless by Working Dog standards.

Show Dog people thing Working Dogs are ugly. Working Dog people thing Show Dogs are genetic cesspools and stupid. Show Dogs are always purebred, are recognized by purebred dog registries, are judged on the merit of their looks as conforming to a written standard overseen by parent breed clubs and giant registries like the American Kennel Club.
Pet Dog: can be a Working Dog, can also be a Show Dog, but is often heard as a term of derision from Show Dog communities who consider a ‘pet dog’ to be of little value and of less genetic quality. The Pet Dog is often a dog acquired for the purpose of ‘being a pet’ or companion to humans in a human environment, like a home.

Pet dogs can serve many purposes, are often recognized for incredible acts of heroism and bravery and there are approximately 70 million of them throughout the United States. (based on a census where the collected statistics were generated through the tracking of license purchases and subsequent registrations of individual ownership from reporting communities across the nation. It is not an accurate number of owned dogs, it is simply a numeric sampling of licensed dogs). Pet dogs outnumber Working or Show dogs, since most people just want A Dog, not a specialty dog.

Either way, there has grown a colossal market for the production of purebred dogs for a consumer market and most recently for ‘designer breeds’ of dogs who have been successfully marketed as somehow superior to purebreds.

Pet Dogs can come from many sources; Show Dog breeders really don’t breed as many litters as some people would have you believe, but they supply more pets to the Pet Dog buying market than they do Show Dogs to the show dog buying market. Since it is not that easy to breed a Champion Show Dog, many breeders breed for years in pursuit of anatomical perfection with limited success.

A pet pup from a Show Dog litter is no guarantee of soundness, smarts or working ability, and the only thing you can be assured of is that they look like the breed they are supposed to represent. That is not to say that there are not good, versatile Show Dog breeders; there are. I have had several successful working dogs from Show Dog breeders who were judicious in their selection process of sires and dams, genetically screened all of their breeding stock and had a variety of genetic wells from which to dip from, either domestically or from overseas; preventing the genetic bottleneck that occurs with a lot of dog breeds that are over-bred (through popularity, which is the death knell for all breeds) and heavily used individuals (Popular Sire syndrome). There is a number of Sporting dogs who can still successfully fulfill the task of their original conception and purpose over other traditional working breeds, but these numbers are dwindling rapidly.

Although a pup acquired from Working Dog blood is no guarantee that he has what it takes to fulfill his original intent, Working Dogs produce working pups with high energy levels and a keen desire to work. Not all working bred pups will end up as working adults, but the percentages of carefully planned Working Dog litters yield more working capable dogs than the most carefully bred Show Dog litter yields Show Dog Champions.

A pup from a Working Dog litter is a better guarantee of soundness, smarts and working ability, and the one thing you can be assured of is that they perform like the breed they are supposed to represent. There is a disproportionate number of ‘Working’ and ‘Herding’ breeds of Show Dogs who are incapable of fulfilling the task of their original conception and purpose over individuals bred exclusively to purpose, and these numbers are growing rapidly.

True Working Dog breeders produce the lowest average numbers of puppies overall, breeding only to incorporate new blood into already successful breeding programs and to replace their aged working dog with a new pup. They are careful how they breed and how they place their puppies.
So how does one go about selecting a puppy?

There are a variety of places to get a dog, but first one must define what (s)he wants in a dog.

If you absolutely must get a ‘Designer Dog’, please be careful that you are selecting a puppy from a breeder who has seen past the dollar and is selecting sires and dams that are genetically clean of the diseases that are inherent for their respective breed(s). Junk bred to junk will produce more junk, no less so than in purebred dog populations. Just because it has a hefty price tag, it is no guarantee of quality or soundness.

If you must have a purebred dog, the same rules apply. Research the breed and look for breeders who certify their breeding stock against the diseases that each and every breed is predisposed to. It is not so much that there are Champions in the pedigree, it is more important that the breeder is conscientious enough to carefully select good breeding partners who are genetically ‘clean’. Expect to pay more. Careful breeders are more concerned with where their pups end up and maintain a responsibility for the pups long after they leave the whelping box.

If you have decided to graze a couple hundred head of sheep, are a policeman looking for your next K-9 partner or an avid hunter looking for the premier hunting companion to take afield, look to breeders who’s breeding programs reflect excellence in performance in those events. Purposefully bred working dogs are not easy to breed, nor are they easy to come by. Increase your success rate of selecting a puppy you want by looking in the right place to begin with. 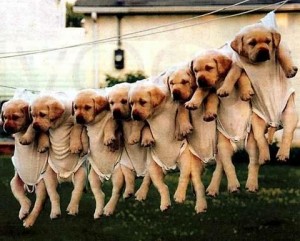 You increase your likelihood of finding a good dog if you research before you buy. Talk to professionals, like Groomers, Pro Trainers, kennel boarding facilities for input on what the ‘easy keeper’ breeds are.

Stay away from breeders who sell on the internet. Although an internet presence is often a means to view many of the dogs a breeder has produced, good sites don’t offer dogs for sale through the site and will require you to contact them directly before any purchase is possible. Visit a couple of breeders in your area. Although many breeders do have stud dogs, most conscientious breeders will more often opt to breed their bitches to dogs from other breeding programs to enhance bloodlines they already have.

You should ALWAYS be able to see the dam of the litter and although she may be protective of her brood, look to see that she is well cared for and in good weight. If the sire is from another area, ask to see pictures, look online for awards he may have received or if possible, view video clips of him at work or in the ring. Through the popularity of the internet, much can be learned from databases created by many breed or performance dog clubs and as a result, massive online resources are available.

There are always shelters and breed rescues local to you as well. If you are looking for a pet, but are not interested in the commitment a puppy requires, there are always local alternatives for older dogs and even purebred dogs through these sources. Every dog is entitled to a good home and if you are willing to acquire a pet through a shelter or breed rescue, you would be amazed at the variety of animals available through these alternatives.