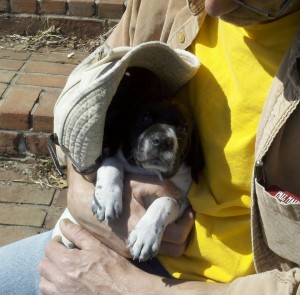 It’s always a good idea to think about not only why you want a dog, but what your plans are for your dog once you bring him home.

Everyone has high aspirations for their new dog. Intentions run wild with possibilities as you and your new pup get acquainted, but even the best intentions can get sidelined once “life” takes precedence. I guess I have a distinct advantage by being a card-carrying member of “The Industry”, but that does not exempt me from encountering roadblocks along the way.

I focus on the necessary and allow the possibilities to fulminate on their own. Zwei will need manners first. How not to jump on people, how to keep his little needle teeth to himself, to relieve himself outside and to exercise caution around our cats. He will learn not to be a nuisance at dinner time, to actively alert when he needs or wants something, how to accept his crate as a place of pleasure and quietude.

Quite frankly, I had no designs on another dog but abruptly found a need for one. When Cotton was diagnosed with Osteosarcoma, it was a devastating loss to me both emotionally and professionally. He was a ‘generalist’ training-wise. He was principally my demo dog for new pet-training clients but more importantly, I had learned to become dependent on him to help assess dogs and help the communication process. He was far faster and far more articulate than my very best efforts and we were a team for 9 years. He filled a gap that Butters’ terrier-like disposition could not, that Joey’s singular focus on retrieving and Mings’ keen tracking ability were and are, simply not suited for.

His sudden death left a gaping hole in my heart. I no longer had *MY* dog to help me. This isn’t about Cotton however. It’s about the puppy socialization Cotton’s great grandson will receive.

He will certainly come to fill the role that Cotton provided, but to what degree is unknown. He will certainly be trained, and I speculate that his ‘talents’ will emerge as we become familiar with each other. What exactly he will do as a specialty is yet to be foreseen, but he will be introduced to birds (he is  POINTER, after all…) as well as other things. He will be obedience trained. He will be taught to retrieve, he will be trained for the show ring and we will probably dabble in a few other activities.

And much like his predecessors, he will accompany me virtually everywhere. He will get to go to the bank, the hardware store, the gas station, anywhere I am permitted to bring dogs. He will go shopping with me at the mall and the box pet stores. He will accompany me on car rides just because. We will start his puppy socialization on Day One and continue throughout his life. I will expose him to as many circumstances as I can muster and as many people as I can swindle into interacting with him. Shouldn’t be hard. Puppies are natural attractants.

Early puppy socialization is critical in helping mold the adult dog your pup will become and it is very important to mitigate exposure to new surroundings and social settings carefully. Developmental periods throughout a pups’ first three months are instrumental in preparing him for adulthood and if handled poorly, can create unintended consequences. Not addressing this important period at all will lead to a fearful, suspicious dog that has never learned to cope with new situations.

Zwei, at 8 weeks, is emerging into the period where appropriate puppy socialization will temper his behavior as an adult. The critical components of this stage must be carefully articulated so his lessons lead to positive, rewarding outcomes. It is classically considered the “Fear Imprint Period”, and it is important to note that his exposure to new stimulus must be handled correctly. Zwei will be introduced to as many new and novel things as I can manufacture, while simultaneously controlling outcomes in order to create confidence, not inhibit it. It is a difficult balance and it is at this point that I truly wish new puppy owners would seek professional assistance.

Puppy classes are nice, for playing and interacting with other puppies within the same age group, but if your pup does little else during this time-frame (7 to 11 weeks) it can have serious impact on his behavior as an adult. It’s a small window of time, but during it, your pup should encounter as many different situations as he will ever experience in his life.

The significance of this cannot be overstated. You have a new puppy. He is entitled to learn about his world with you as his guide. If you envision him accompanying you on long treks in the country, the 4 hour trip to the lake, as a social butterfly during the Holidays or on the beach frolicking with other dogs, don’t wait til he’s 6 months, start NOW.

If you have an acquaintance with a mature adult dog that is well mannered and polite with other dogs, it’s not a bad idea to engage in a controlled meeting including your pup, on neutral ground. Mature adult dogs are far better teachers than even the most talented of dog trainers and can help your pups’ encounters with his new world not only be pleasant, but instructive. Spending time in the company of a reasonable adult dog can and will help dramatically. It will provide your pup with the ability to overcome his own concerns about novel things in the environment, apprehension to strangers or other dogs and so on. Modeling behavior is something your new pup is used to doing. He just left his litter, where his dam and litter-mates often acted as catalysts for his own behavior. Around 12 weeks of age, social attraction loses it’s importance to the young dog by varying degrees as his world expands and he begins to practice his autonomy.

Controlled exposure to other dogs is not the only thing your new pup needs to learn. Eventually, he will need to see a vet, so a positive experience with your vet is important. Frequent car rides to and from different places will help alleviate not only fear of transport, but the potential fallout from only transporting him to places where he can easily develop negative impressions. Getting him used to travel is easy when he is still small and easy to confine. Waiting until he is a young adult is never a good idea.

Handling feet, ears, teeth and bodies early and often will go a long way in endearing you and your pup to your vet, groomer and others who may have to “handle” him in the future. I see rough customers every day, and almost 100% of their fearful behavior is because they were never adequately exposed to it in their formative imprint periods. Nobody likes a nasty dog, whether he’s obtuse at the groomer, the vets’ or the boarding place where he will be handled by strang while you are on vacation.

Remember, first impressions of your pup are a direct corollary to your early influence. Pups don’t “grow out of” their behaviors. They acquire them and practice them from very early ages, whether you influence those behaviors or not.

Tomorrow, my pup comes home. In less than 24 hours, he will fill our house with puppy-ness. I will be prepared.