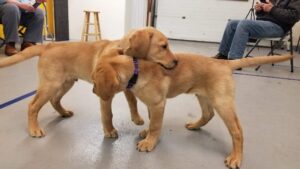 Every trainer encounters multiple dogs from the same household more than once in their career. Most of the time owners complain that the dogs no longer ‘get along’, or are starting to quibble over things like toys, food, or affection.

A lot of times, owners are entirely unaware that their dogs have been symptomatic for these issues for quite some time, and usually, it is only after escalating animosity do they ever seek help.

Throughout the years, this phenomenon has been called many things. Most recently it’s picked up the moniker “Littermate Syndrome” because it is most frequently seen with households that acquired littermates, or dogs within the same behavioral age range*, regardless of breed or source. My friend John Sparks from Sparks K9 in Washington State calls it “sharing one brain.”

I disagree with the term “littermate syndrome” because it’s not specific to littermates or even dogs of the same behavioral age range. It can happen at any time in a dog’s life, and is largely contingent on the dogs spending more time with other dogs in their family group, than with the humans they live with, in meaningful ways.

For the longest time, people were, and to some degree still are, led to believe that two dogs are easier than one.
Only in the sense that they spend more time in their own company than owners are willing to spend with them. The idea of leaving the responsibility for their education, enrichment and ‘socialization’ to a conspecific is always a mistake. Inadvertently, people are largely responsible for the environment that ‘littermate syndrome’ most commonly occurs in.

We as humans, gravitate to folks we identify as more like ourselves. We choose our mates and our friends based on their similarities to us. We prefer the company of some of our co-workers, but never all. We are careful in who we select as friends and as life partners as a result. Our beliefs and opinions are formed by these associations, or confirmed by them.

With dogs, a creature expected to live in a foreign world, it is the same. Their behavior is more heavily influenced by the being they spend most of their time with. If it’s not a human, what would you expect?

Remember your mother telling you that in order to *know* a person, take a look at who their friends are?
Dog behavior is either emulated or revealed, by the company they keep.

Recently, I did an evaluation for two Dachshund littermates. They had been acquired as yearlings and had lived in a home with two older dogs for the last 4 or 5 years. These were mature adult animals, both had been de-sexed pre-maturity, and had never existed apart. The female was relatively neutral around people. I would classify her as emotionally indifferent to them. Around strange dogs, she was offensively aggressive. The male was fearful and defensively aggressive with humans and intimidated by the presence of other dogs.

When the two were separated for the evaluation, the male was frantically attempting to return to the female, even by menacing his handler, while the female remained neutral without him. When I took her and removed her from her owners, only then did she become moderately nervous.

During the evaluation, I had made the comment that the dogs were ‘pathologically bonded’ to each other, to the point that they could not function normally without the presence of the other. The raison d’etre for the little male was in fact his sister. She preferred to intimidate and terrorize him as well as the two older dogs in the home. The owners’ misunderstanding of this behavior inadvertently allowed it to reinforce to the point of bloodletting.

She wasn’t just guarding against food, but toys, owners displaying affection towards any of the other dogs, locations where these things resided, or where they were likely to occur. She had the owners convinced she was being “protective” of them other than the tiny tyrant that really wished she was an only child.

What people don’t realize is that the Peaceable Kingdom will never exist. It cannot exist, not in our world and not in nature.

There are occasions where multiple dogs are compatible, but there is more to it than just one dog deciding that their conspecifics are safe to cohabitate with. An established order emerges over time and influenced by the custodians of the environment. There is an ancient force that influences the hierarchy between the sub group of dogs within the larger combined group of dogs plus humans. Contrary to what the human actually thinks about this arrangement, they actually have a pretty significant impact on its success or failure.

As professional trainers, we see a lot of mixed pairs of dogs from different behavioral age ranges as frequently as we see dogs paired within the same age range, and the outcome is always the same: “We’ve never had this problem with [dogs] before! The have always gotten along!”

I assure you, they have not. There have been quibbles all along, but owners rarely recognize them. Whether it’s busting through the doorway to get outside first, who can get closer to the owner with the sandwich, the preferred spot on the couch, or the flying disk they race after in highly aroused, competitive states. That arousal you see? There’s one dog determining his odds of success should ‘something happen’. The other dog is determining if he has to defend himself, his prize, or access to his prize. I see the end result of this scenario at least a dozen times a year.

Biologically, dogs are not designed to ‘share’. They are designed to survive, come what may. Can they be made to share? To a point. A better question to be asked is can they be taught not to bicker? Of course. And as I state in all things, how much time do you have? Yes, there exceptions to the rule, but in the case of resource guarding, it’s never organic.

It’s a survival tactic. Being defensive over food or other resources is a feature of evolution.

In the wild, once wolf pups are old enough to move with the pack, they are at a higher risk of starvation. They are deemed mature enough to start accessing food when it’s available. The dam is no longer bringing food to them. She is bringing them to the food. The highest mortality rate among weaned wolf pups is through depredation of other predator species and starvation. Early on, they are indoctrinated into the art of defending that which they possess.

These instincts didn’t die on the domestication branch of the evolutionary tree. They accompanied the other genes than made wolves into Pugs or Maltese. Or in this case, Dachshunds. These instinctual drives are still very much intact. One of the primary complaints of dog owners is their dogs’ behavior around food, toys or sleeping areas.

People freak out when I tell them it’s natural.

The ‘two dogs, one brain’ syndrome that my friend John subscribes to is the same phenomenon of social interaction that structures any group of animals. Even humans. It’s not that one dog is emerging as a leader of any sort, but each dog is adapting to a role that has been pre-programmed before dog met man. Hell, even human siblings fight. I myself have a sibling that hasn’t spoken to me in over 20 years. I’m fine with it. It saves me the trouble of having to kick their ass and embarrass them in front of their kids. I chose to distance myself not because I am conflict adverse, but because discretion is the better part of valor. I was raised better. I had the distinction of human language and human values and human influence. My sibling did as well, but to them, the allure of the thing they wanted was always greater than the thing they had. Like in the Aesop’s Fable about the dog and his reflection in the water: “Who all coveteth, oft he loseth all.” It’s an old story, but it has been so intricately weaved into the fabric of our subconscious, we can recognize it in ourselves, but cannot recognize it in our pets.

In the wild, dogs have room to escape and avoid their antagonists. In the human world, with few exceptions, they do not. Living in a home with a roof and walls poses several problems that simply retreating into another room, or being sequestered into a crate will not resolve. These things tend to build over time, but essentially, they begin the moment those two dogs are cleaved together. It takes them moments to identify who supplies the idea and who provides the action. One is always reflecting the information they get from the other. That freakish symbiosis creates a bizarre feedback loop that is neither healthy or devoid of fallout. It’s just like any other toxic relationship you have ever encountered.

Dogs grouped together without serious consideration for developing their autonomy is never a good idea. Think Lord of the Flies. Animals struggle enough with how to adapt to a human world and need to focus on that skillset first. They can absolutely spend time with other dogs, just not in dog parks, daycares, or live around the clock with them. Even human children don’t ‘raise’ each other. That is what parents are for.

So, how does one successfully integrate and live with multiple dogs?

It’s easy, actually. Be prepared to remove all shared resources like toys, and only allow access to pacifier toys while crated. Never allow multiple dogs to engage in activities that engender strong competitive arousal, like fetch or tug simultaneously. It’s fine to do theses things with each dog, but not multiple dogs at once.

Crate doors are shut whether dogs are in or out of them. Everybody has their own ‘space’ to retreat to when things get spicy. I’m not talking about posturing and outward signs things are about to happen, but there should be no active play indoors to begin with and when things get too rowdy, if you cannot stop that with a word, it’s time to start focusing on training.

That brings us to the last, but most important aspect of successfully integrating multiples into a household safely; time spent as individuals. Training is certainly one way, but allowing them to decompress and engage in activities without being part of a subgroup is probably more important than anything. Just like us, we need to be shown that we are valued. Our dogs do as well. Take the time to spend with each of them as individuals. Work them together, but on skills that foster independence and self control like stays and recalls out of prey or social drives. While one dog is actively learning (heel, recall, fetch, etc.) the other dog(s) are practicing stays in a variety of positions, for varying durations.

There are always professional trainers to walk you through it. I have options available for folks in the central Maryland area as well as distance learning options for folks outside of the state..

If you like this work, or this author, feel free to Buy Me a Coffee to help support this site.

*behavioral age range- dogs mature at roughly the same rate through ‘imprint periods’ that delineate the time spent in infancy, pre-adolescence, adolescence and adulthood, just like humans. A dog between the ages of 8-10 weeks is not the same degree of emotional maturity as a dog even a few weeks older, yet people call them ‘puppies’, even though at roughly 12 weeks of age, a dog is already considered pre-adolescent.