How to train a dog 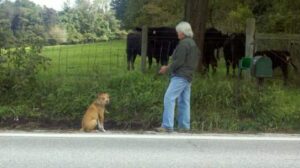 When it comes time to learn how to train a dog, the leash and collar is the primary device we use to communicate with them. Whether that collar is a buckle, martingale, chain, prong or electronic, it is still accompanied by a leash that acts as a conduit for information that flows both ways.

There have been a thousand books written, and since the advent of the world wide web, dozens of internet training forums and self promoting individuals that try to demonstrate how to train a dog, and they all fall short of the one prevailing constant; how to handle the leash correctly.

People tend to respond by jerking on the leash when the dog pulls. The dog usually pulls harder. The harder the dog pulls, the volume of the pressure increases.

What people don’t realize is they are creating that pressure and the dog is simply trying to escape it.

We have all seen the dog scrabbling at the end of a leash in a frenzy to get anywhere but near its owner. The owner is hanging on for dear life as their dog vaults down the street executing the best impression of a Naruto run, choking and gagging like they are going to pass out. The owner blithely follows along behind because they don’t comprehend that they are actually reinforcing pulling behavior.

The dog is secured by a tight leash, held in a death grip by the bewildered human who has absolutely no idea that they are contributing to the erratic, hysterical pulling simply because they are pulling back. The human is unaware that they are precipitating that resistance.

They never allow the dog the opportunity to escape the pressure.

I have yet to meet a dog that didn’t have a powerful oppositional reflex. The very first thing a young dog does when the leash is attached to the collar around it’s neck is to fight it.

It’s our job to teach them how to accept it.

When we begin to train a dog, we learn to apply pressure in a variety of different directions. It’s important to identify how pressure helps dogs comprehend what it is we ask of them, in contextual ways. When we teach -sit- for example, the leash and collar are held in such a way that we leverage pressure in an upward direction with the collar, and downward with the left hand on the dogs’ rump simultaneously. Our message is “sit!” The dog learns how to do this because physics dictates the dog do so, in order to alleviate the pressure. Training creates a series of signals which alert the dog that a specific action is required.

Every behavior we teach, is through the application of some form of directional pressure.

To the dog, the signals he registers are the hand placements that preempt that application; the hand placement for the sit cues the dog that sit is expected, before the command is even uttered. Same for down, stand, and stay. Our practiced movements become cues that the next event requires a specific form of participation.

What people don’t realize is that dogs read the context of that pressure literally.

Training should occur in such a way to create a common language between humans and dogs. The training isn’t so much to “fix” dogs, but to give humans a means of overcoming the communication barrier between the two species. We may be endowed with speech and opposable thumbs, but dogs are gifted with a sensitivity that defies our cumbersome, inelegant attempts at communication. We hobble dogs with our devices and yank them around without observing what they are trying to tell us. We should focus less on how to train a dog and more on how to effectively communicate with them.

The devices we use to communicate are there to help broadcast our meaning in a salient way. By careful manipulation of directional pressure, we can help dogs understand how to move and when. It’s when that directional pressure is contradictory do we see confusion or conflict.

The leash is there to prevent escape or avoidance. It doesn’t really need to do much more than be attached to a dog and a thoughtful human. The type of collar determines the amount of pressure applied to the dog at any given point.

Directional pressure isn’t initiated as punishment. It’s simply a tactic to help a dog determine how to move in order to relieve that pressure. It’s not the volume that matters as much as the direction and the persistence. Rarely should it have to increase, and it should never be violent. It just needs to last longer than the resistance put up to oppose it.

When trainers begin to explain how to train a dog, a lot of attention is given to the concept of “pressure/release” but precious little is spent understanding the importance of directional pressure and how it affects performance.

The context of directional pressure is singularly the most difficult concept to teach handlers, whether they have handled many dogs or are just starting out. The instinctual draw towards oppositional reflex is strong in both species.

In order for our dogs to learn not to fight pressure, we need to stop creating it.