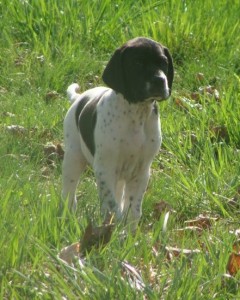 I thought this was a topical discussion considering the Samantha Brick article regarding the purported disadvantage of being attractive and a comment on FaceBook about the deliberate, planned breeding of mix bred dogs. My mind works in funny ways, I agree, but bear with me.

My friend Janeen McMurtrie expressed a humorous lack of concern over a few folks who took umbrage with her support of the act of pairing two healthy dogs of different breeds in a purposeful way.

“They” apparently have not been paying attention to the news amongst us dogfolk in the past few months; impelled by the untimely and tragic loss of my Pointer, Cotton, to osteosarcoma on January 24th, followed by the disheartening diagnoses of several of my friends dogs, all of whom are purebred, most of whom are considerably young, from a variety of cancers like hemangiosarcoma, mast cell carcinoma, and several as-of-yet un-diagnosed illnesses that are taking our dogs far too quickly.

Blogger Gina Spadafori announced in late February that her Flat Coated Retriever, McKenzie, was diagnosed. More followed. Almost too numerous to mention. I opted not to provide their names, since they have not taken their personal battles public. Gina is on a mission.  She has a dog in this fight. We all do, really.

A good friend of mine lost her Boxer to an unknown illness, also at a young age. Another acquaintance; his beloved dog just a week or two ago. At the same time my own dog was dying, another friend contacted me to let me know that his cat had been diagnosed with osteo as well. She was much younger than Cotton. And obviously a different species. What makes this remarkable is the location of the cancerous lesions in both animals was in exactly the same spot. Right illial wing of the pelvis. A common injection site for booster shots used in either species.

This is a cross sampling of a variety of breeds, all “pure”, all young, all diagnosed with insidious disease.

For two of these breeds (Flatcoats and Boxers) the rigid breeding practices of the purebred community has much to do with the genetic cesspool that has created the environment where this can occur. For the Pointer and one of the other breeds known to me, probably not so much. Although cancer is not as rare as it once was in Pointers, there are many things to consider and in Cottons’ pedigree at least, it is unlikely any genetic bottlenecks occurred. The same could be argued for two of the other breeds recently diagnosed, admittedly, only to the best of my knowledge. I have not seen their pedigrees, I do not know for sure.

Cotton had a pretty open pedigree for a 21st century Pointer. He was show bred with a tail dam line of working dogs. His sire represented more contemporary show breeding, but he, himself, was an outcross of entirely unrelated ancestors.

I imagine back in the woodpile, there are some related ancestors but there is much more genetic variety available in the Pointer breed than in either Flatcoats or Boxers. But Cotton died, just the same.

So the question remains why? Genetics? Environment? The suppression of immunity through the cocktails of shots our dogs are given in the prevention of communicable disease? More research is needed and as time avails, I will attempt to include it here.

Know this however, our dogs and cats are the bellwether for our own health. Much more so than any other animal. Because they are fed from the same food sources, they occupy our environments, are exposed to the same toxins in our ground water, soil and the air we breathe.

I for one, am acutely aware of the tenuous lives we live. Having suffered my own exposure to carcinogens (involuntarily) during a good portion of the ’90s through the over-saturation of our groundwater to agricultural runoff, I am cognizant of my own mortality.

Nineteen chlorides and phosphates, in significant concentrations found not only in our water supply but our bloodstream as well. Saturation levels to the point that the EPA advised us to limit our contact with the water, and not to cook with it. What damage did that span of time do, because we didn’t know? Exactly how gruesome will my death be?

But, we are talking about healthy dogs. Purebred dogs now, but all dogs eventually.

Cotton never walked on any of that ground. He never drank from the water there, nor breathed it’s air. None of the dogs I am familiar with had. Cotton was born on the opposite coast, was raised as thoughfully as I could possibly conceive and lived a healthy, fit lifestyle. He was never overweight, was always in the peak of condition, was fed health consciously and died a horrible death anyway.

He was bred to be useful, his usefulness was a tribute to careful selection.

The pup in the picture above is Cotton’s great grandson. He is the product of an outcross breeding from two legendary kennels. It is a breeding that has never been done. The pedigree is dotted with Field Champions, Dual Champions and other working dogs of note in almost every generation. I was not made aware of the existence of this litter until Cotton had been diagnosed. I certainly was not looking to replace him, but the convergence of the stars and too many other coincidences indicated that it was the right choice, so I said yes.

This puppy is also the product of a planned breeding. His pedigree is a wild deviation from todays’ Pointer pedigrees,but his pedigree is not the outcross that Janeen supported in her comment on FaceBook.

Hers was more in line with the English Pointer that saved the Dalmatian. Or the introduction of native Basenji blood into that breed. Or Gina’s mission to cure the Flat Coated Retriever from the cancers that plague it.

He is Zwei. Pronounced ZVY, or VY. It means “two” in German. He was named by my son. It was the first name that popped into Conors’ head as a tribute to Cotton. As in, Cotton #2. I will not change it. I was present at Zweis’ birth and I have been pretty diligent about spending time with him throughout his early puppy-hood.

Before the criticism begins about taking a puppy from a breeding that produced at least *one* dog to have died from cancer, understand that there are many factors that contribute to it. Although there is merit in the argument that genetics play a role, overall size is more of a factor for osteosarcoma. Pointers as a breed are relatively healthy dogs and cancer has never been an issue, until recently. Mast Cell and Mammary cancer have appeared at higher than normal frequencies, as has Hemangiosarcoma, but my research has led me to limited resources, of which there seems to be no determination between English or German Pointers (of either the smooth or wire coated varieties). Since genetically, they share common ancestry, it is pretty safe to say that there is a genetic predisposition for these diseases in both breeds.

Pointers are an old breed by A.K.C. standards. Some breed historians have them going back as far as the 16th century in certain parts of Europe, with their genetic composition being primarily scent hounds with the occasional Greyhound thrown in. Suffice it to say they were pretty desirable as hunting dogs for many parts of Old Europe and it would not be remiss to speculate that there were several land races that comprised this ‘breed’. Pointers are behind most of the modern sporting dog breeds to some degree. For the most part, they have been exempted from overpopulation by the average pet owner; they require space and time that most people are not willing to sacrifice. They are the dominant participant in upland bird hunting field trials and have made their mark as elite hunting specialists.

Their popularity in the show ring was magnified by the multiple Best in Show winner CH. Marjetta’s National Acclaim and his victory at the Westminster Kennel Club show in 1986. Since then, there has been a steady increase in the breeds numbers.

They will no longer be protected from genetic bottlenecks anymore as numbers gain in popularity, as more people breed for the show ring and patently discard the value of the FDSB registry and the unlimited availability of genetic material from which to draw. Not that the FDSB is exempt from problems either, as they have increasingly began a practice of excluding registration to dogs not recognized as “pure”. They have a lot more genetic variation than the AKC, but exactly how long will it take before significant increases in genetically triggered diseases arise?

Somehow I highly doubt the gentleman on the moores of the British Isles gave a damn about the purity of a dog when he went to selecting a suitable mate for his old bitch Nell when it came time to bring up her replacement. I think he was more apt to be concerned with the dogs’ ability to perform the task which made it useful. Whether finding game, herding livestock or guarding against marauders; something tells me he wasn’t concerned about coat color and angles. Something also tells me that longevity was less an issue also, since survivors of any breeding were subjected to a more rigorous selection process than any we could devise today.

As for mutts; I have absolutely no opposition to the deliberate out-crossing of two different breeds of dogs, whether as pets, working dogs or as Gina is suggesting. As the Dalmatian breeders or Basenji breeders have achieved in the conservation of these existing breeds and apply the same judicious practice to breeds like Boxers, Flat Coats and dozens of others.

As for being beautiful, beauty is only skin deep. When you unmask the beauty, what horrors would be revealed?