Groomers take a lot of risks 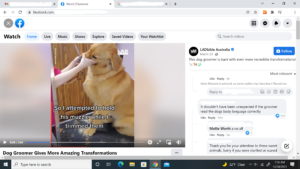 I pay homage to my roots and to all the groomers past and present that have endured the worst of the worst, and still kept their wits about them.

This may come across as a bit like kicking a dead horse, if you will forgive the phrase. I am a person of a certain age, and this is a term I have heard throughout my life.

When I was young, I must admit to having been spoiled by the dog culture I grew up in. It had never occurred to me that anything other than *trained* dogs ever existed, since my first intrepid step into the fray was with a carefully bred dog from a wildly successful kennel, right in my own back yard.

Even the dogs of my neighborhood, although most not as high bred as my own, were of a type that didn’t scream *dangerous*, *ill-mannered*, or even remotely difficult to live with. After all, they were exercised all day by a roving band of free-range children, in groups no less than 2 and usually numbered as many as 8 or 10. The kids. Not the dogs. There were always plenty of dogs to go around.

I was tutored at the knee of many distinguished people in the dog world. It was and still is a relatively secular community, although the tiers have shifted in favor of who monopolizes social media to the best advantage, which has taken precedence over a reputation of producing quality over time, and generational word-of-mouth advertising.

As I grew up, it was a forgone conclusion that dogs would somehow be my vocation. By the time I was in my early 20s, I was so firmly entrenched in the culture that it would have required surgical amputation and a lobotomy to remove me.

My world had always been show dogs with professional groomers, climate controlled housing and refined manners. Imagine my surprise when I realized that the *real* world was not filled with pretty show dogs with pretty manners and paid attendants, but with dogs that rarely saw a veterinarian, let alone groomers. When I landed my first job at a facility that managed over 150 dogs in boarding and did about 20 dogs a day between 3 groomers and one tech, I was fast-tracked into training before I even knew what hit me. Because every encounter we have with an animal, somebody is learning something.

Reality hit me. And scratched me and bit me.

And here we are, over 4 decades later, and nothing has changed. I don’t get scratched or bitten anywhere near as much, because I learned not to.

So in the wee hours of this morning, I am scrolling the Magazine of Horrors and I come across a video put out by a ‘news magazine” called the LadBible. Sorta like Inside Edition for stupid stuff. There was a clip from a relatively well-known individual that posts a lot of groomer content on TikTok. Yet another denizen of vapid, time-sucking content.

In this particular video, the woman is grooming a 9-month-old Golden Retriever. I am not going to slag on her. She is one of the better pet groomers I have seen. She does a decent job, is kind to her dogs, and has a decent amount of skill. She will only get better, if she stays with the trade long enough.

The title of the video indicated “AmAhZinG TRANsforMAYshunZ” which, meh. The screencap however, said “It is so unexpected when a sweet, well behaved dog snaps at you OUT OF NOWHERE.” Emphasis elements are entirely mine.

Of course, I had to look. You do too. Here’s the link. https://fb.watch/aaPAXs1bFO/

The groomer didn’t didn’t do anything wrong. Her handling is going to look different than my handling, but I have probably 30 plus years on her. I also know better than to trust a pet bred 9-month-old male Golden Deceiver, but I digress. This is possibly his first groom? Maybe 2nd? There are reasons this is likely to occur, but her handling is NOT one of them. Be sure to appreciate the comments section while you are there. Nothing stinks more than a couple thousand comments from folks who have opinions and not much else. Like experience, or even sense, but again… stay on track, Linda.

But the speed. Oh my. The speed through which this dog committed this act.

Less than a second.

I TRIED to capture the moment, but without a better editing deck, I could only capture the before and the after. Not the during.

LESS THAN A SECOND.

If this dog had had ANY commitment whatsoever, this gal would still be sporting a chit for PT from the damage her hand would have received.

This fella had malice in his heart. He wasn’t joking.

How did this happen? Why did it happen?

Because who would EVER believe that a GOLDEN would try to take a chunk out of anybody?

I’m here to tell ya; of all the resource guarding, dog aggression issues we see yearly? It’s not the pit bulls. It’s the young male Goldens.

Is it breeding? Probably. When selection never considers temperament or selects deliberately for a feature (coat color and texture in particular) you’re bound to get issues. The inbreeding coefficient, nature, nurture… It all plays a role.

Because we have all seen THIS, yeah? https://youtu.be/-vIg2EHXYno

I’m sorry. That dog endowed us with a clear demonstration of millions of years of evolution. He wasn’t “saving” anything. If you watch the video with a critical eye, you witness an epoch of genetic engineering turn this fluffy, overstuffed couch potato to almost-wolf. The only part of the genetic expression of prey behavior that was absent, was the kill/consume sequence that hunting dogs are selectively bred away from.

LESS THAN 1 SECOND from mild-mannered house pet to a statistic.

People get tired of hearing me whinge about early training of dogs to tolerate restraint and confinement. As much as people slag on show dogs, I have never met a show dog that didn’t tolerate the touch of total strangers, or to tolerate being incessantly fussed over by people. It’s their job, and that job starts early in life. As early as 5 weeks of age, the breeders are stacking them on grooming tables and teaching them to remain still. As their coats come in, they are trimmed and ‘handled’ every day, in some meaningful way.

By the time they are ready for their first set of shots, they have had their nails trimmed every couple of days.

By the time they are old enough to show, they have stood still for examination by unfamiliar people, from head and teeth to tails, feet and genitalia.

By the time they are adult dogs, they have been in the presence of many strange dogs in close quarters, been handled by total strangers, traveled by car extensively, and have been physically restrained hundreds of times for grooming. They know how to walk on a leash, how to greet humans and ignore other dogs, and how to be quiet in a crate either at home or during transport.

I am particularly rigid in my expectation for dog behavior in the tub, on the table or 4 on the floor as a result of my early influences. There is absolutely no excuse for it, except in people’s heads. The suggestion that certain breeds cannot be trained because of the breed is the same intellectually bereft train of thought that suggests certain breeds need *no* training because of their breed. It’s simply not the case. All dogs can benefit from training. Including the 9-month-old Golden I wrote this post around.

And before anyone gets their britches in stitches, absolutely, just like a lot of unskilled, under-educated ‘trainers’, there are a lot of dog groomers that should either abandon the trade altogether or seek mentorship. That’s the owner’s job, too. Knowing what kind of person you are hiring. We’ll talk about that another time.

Train your dog. It’s not that hard. It really doesn’t take as much time as having to endure a mannerless liability for the duration of its life. It’s cheaper than a lawsuit, or hospital bills.

And maybe the grandkids won’t get hurt.