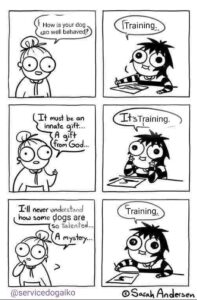 There really is nothing new under the sun when talking about dog training.

Years ago, I was handling a dog at a public event being put on by an animal rescue. We were sort of in between showtimes and resting comfortably under an awning near my truck.

Cotton was lounging in an open cloth carrier against the rear of the truck, big old potato head resting on his feet, one eye on me and one watchful of the stream of people. I sat a few feet away, manning our booth from the comfort of a camp chair. We had been there a fair number of hours, and although the temperatures weren’t too demanding, I was thankful for the bounty of our canopy.

A woman was wrestling a youngish, ornery dog on the end of a retractable leash, which naturally, was attached to a poorly fitted collar. She dipped under my canopy to avoid an altercation between her dog and another passerby with their own uncontrolled dog. Cotton being the elder statesman, inverted his posture to face away from the oncoming dog so as to keep the climate neutral.

The dogs are within feet of each other before I made the woman aware that there was a dog in the open crate and suggested it might be a better idea to retract her leash before someone makes a mistake.

The first thing out of this woman’s mouth was “Oh that’s ok! My dog is friendly!”

“Yes, he may be, but my dog is sleeping, and since I’m pretty sure you don’t like it when your sleep is interrupted, I would be thrilled if you didn’t allow your dog to move any closer. This dog’s been working since we got here and he has another gig before we are done.”

I’m not sure if this gal expected her own private showing, or if she was going to wait for the demo, but the conversation edged towards what Cotton’s “training” entailed. All the while, the dog lay quietly unrestrained in his open carrier, head on paws, like the respectful gentleman his training had made him.

Even in the face of his obvious discipline, she couldn’t understand that TRAINING prevented my dog from interfering with her dog.

TRAINING was the divining factor that saved her dog from losing his nose when he ventured too close to Cotton’s lair.

TRAINING was what directed my dog to ignore that animal and retreat to the interior of the truck, since the sanctity of his privacy had been so rudely breached.

TRAINING is what prevented me from booting the woman out on her ass for being so…obtuse.

One of the biggest misconceptions in dog training is this notion that dogs are capable of the same cognitive leaps as humans; that once we practice a skill a few times, that it is permanent memory.

Which is where most dog owners struggle.

Owner takes their dog to training. Trainer demonstrates how to execute a skill, sends owner home to practice, to which owner may or may not actually do the work, and then they complain that their dog is stubborn, stupid or in other ways, openly defiant.

There are so many ways I can take this discussion. Elsewhere, my friends at Baltimore DogWorks have written about the supplemental skills school teachers inevitably teach our children in the commission of their actual work. How certain exercises develop or maintain compatible skills throughout the education process, or how additional skill building enables the student to perform each task, or maybe just selective tasks, even better.

Elsewhere, a person I admire tremendously, invokes patience above all else. Emotional neutrality is a skill. It requires many years of practice and refinement, which as far as I’m concerned is the epitome of mindfully planning how your practice will ‘look’, with achievable goals as a measure of your practice’ success, or failure.

Refinement. Precision. Practice. All words I use to help owners see how to make their training more productive.

I know a LOT of owners; both pet owners and performance dog handlers who drill and drill and DRILL their dogs into stifling boredom or open resentment for the work. Whether it’s *don’t lunge at other dogs*, or performing a 40 point heel at the National Invitational, heel is taught THE EXACT SAME WAY.

It has a beginning, where we teach the concept -follow the leader-, and refine this over time and precise practice to end up meaning -walk within a handful of inches of my left leg, throughout any directional changes, obstacles or pace changes. Do this while paying careful attention to me.

That’s not acquired in a week or two. It’s only acquired over the passage of mindful, goal oriented practice.

People rush through the work, thinking obedience is heelsitdownstaycome.

It’s not. Teasing out each behavior individually does more for the learning process than trying to jumble them all together and at once.

When you are wrestling with a dog that lies down after his sit cue, could it be that maybe he’s been taught that down always follows sit?

That’s not training. That’s the result of patterning behavior.

In the dogs’ mind, sit is always followed by down, because that is what he has been conditioned to believe. In our mind, we just want to get through the work.

It’s helpful to remember that obedience must be a message of clarity. If I tell my dog to sit and he slides into a down without consequence, what I have effectively taught him is to lie down when I command “SIT!”

That isn’t a training error, that’s a handler error.

Accepting “close enough” is the fastest way to ruin all of your efforts, as the dog begins to pick up on the lax rules governing expectations.

And that’s the real crux. Expectations.

We all want our dogs to be ‘good’, but when we ourselves struggle with what ‘good’ means, we’re just taking stabs in the dark.

When we think of our dogs’ learning, we have to think LEGOS; fitting piece to piece until the rendering of a trained dog is complete.

If we think in terms of creating precise visual images for the dog and help him achieve right each time we make the ask, it makes it easier for him to understand when the asks become more demanding.

These things never change. As much as people involved in dog training like to think they are innovative and whatnot, the skills to get wherever they are headed are the same.