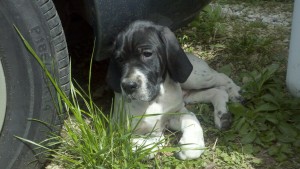 Little guy has been here for about 4 and a half hours and he’s konked out in his crate after a pretty busy afternoon. All of his party guests left and there wasn’t much left to do besides pass out from exhaustion. I imagine he’s pretty happy, we made good and sure he got pretty tired in case he wasn’t.

I can only imagine what the little guy thought when we stuffed him into a crate for the ride home, especially after the journey he had just gotten back from the day before. That had been many hours on the road, but with his litter mates and with folks he knew. He had a great time visiting with many new Pointer friends in Virginia, based on the pictures I saw, so he had to know that this trip was somewhat ‘different’.

He and Conor got acquainted in the back seat, or rather he talked and Conor listened.

After what seemed like an eternity, he finally fell asleep and we made it home in a reasonable time, as in, before the puppy weeping started all over again.

He wasn’t THAT bad, I imagine it was a pretty startling revelation to his little 8 week old mind. He “knew” us, somewhat, had smelled me from his first unassisted breath, but his brothers and sisters had been a chaotic constant in his life until now. He was “alone” for the first time in forever, with people not ‘his’ people in a weird old smelly truck heading off to Gawd-knows-where.

His first day started like any other at his breeders’ home, and ended up here, with a pretty long road trip and a bunch of foreigners in a strange place. He started out investigating the undersides of a few auto bodies before he decided to emerge and introduce himself to his new friends Dave and Emily and their dogs Dodge and Dakota.

Emily, Dave, Dodge and Dakota were waiting for us when we arrived home. We unceremoniously dumped (not really, more like ‘placed carefully’) into an ex pen to let him pee and then proceeded with the trial by fire. Let him get his bearings, allowed him to explore the cars and the people and gave him the space to use his nose and seek his own comfort.

It didn’t take him long to find his legs and use them; first grappling my foot as it hung from the tailgate of my pick-up, then around Conors’ arm, then Emily, then Dave, then back to me in a chaotic spasm of activity for about two hours. Tug games with Conor, Bagel Chip feeding by me, a lesson in boy-dogs-don’t-nurse-puppies supplied by Dodge and life is good.

We offered the little guy some late lunch, but there was way too much to do to eat it, so I imagine dinner tonight is gonna taste mighty fine. He wasn’t about to eat it in the ex pen anyway. He requested that it be taken out of the pen and he nibbled at it for a minute or two before off to do more exploring.

He had four non-stop hours of activity. Smooches and attention from total strangers, interactions with two strange looking dogs, the undercarriages of at least 4 automobiles (every puppy needs a few hidey-holes) and a really cool garage that smells like chicken, apparently.

He got to see his very first Dove wing which was absolutely awesome, so that’s a great sign and then someone must have flipped his OFF button because about 5:00, down he went. Conor carried him up the hill and into the house for a much-needed nap while we cleared away the party favors and said goodbye to Emily and Dave.

Even with every dog in the house howling at the newcomer, the kid is sleepin’ right on through.

I guess I can wait til he wakes up…