The aggressive dog, the responsibility rests with YOU
717-880-4751 training@lionheartk9.com

The aggressive dog, the responsibility rests with YOU 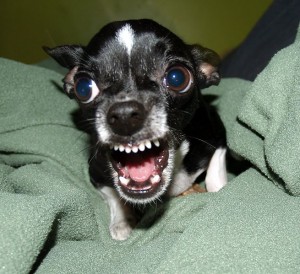 I got a call from a friend the other day. She had taken the opportunity to catch her breath from wrestling a 4 pound landshark of the Poodle variety. The dog had just laid her hand open when trying to extract it from a crate.

Needless to say, my friend was shocked and irritated, not because the aggressive dog bit her (trust me, in any profession that involves animals, it’s not a matter of if so much as when) but because the owner failed to tell her of the dogs’ proclivity to do so.

After the bite, my friend dutifully made the call to the owner to let her know there was an actual injury, to which the owner cavalierly responded “Oh, again? She does that all the time!“

Additional conversation revealed that not only does the dog attack it’s care-givers, it attacks its owners and their guests as well. Pretty much on a daily basis in fact, and has for quite some time. This dog is 4 years old.

They find it cute that she can empty a room of it’s occupants and have never done anything to discourage her behavior. She has ‘left her mark’ on those who know her, in more ways than one.

Later that same evening, I was surfing a few social media sites I frequent and another friend of mine had made a comment about a mature adult Rottweiler attacking one of her employees and taking her to the ground. Thankfully, a second employee was close by to stop the dog from what could have likely been another sensationalized headline on the local news.

Auditing the posts of the shop owner revealed some interesting things; that the dog was a new client, that the owner did not disclose this information when they dropped the dog off for it’s appointment, and ressearch revealed that there had been prior history at other grooming shops of similar acts.

I know for a fact that the Poodle had no previous training. I am unclear as to whether the Rottweiler had. I also know that the owner of the Poodle will not seek training for her aggressive dog, since they have permitted this dog her indiscretions and since “she’s only 4 pounds!“

The responsibility for aggressive dog behavior isn’t with their groomers or vets or any other caregiver, it’s with their owners. The fact that neither owner was willing to disclose their dogs’ penchant for defensive biting is negligence at the least, criminal at its worst. If either of these dogs were being groomed for the very first time is no excuse either. Considering the age of the Poodle at least, that is unlikely.

News programs, social media and water-cooler conversation is fraught with discussions about dogs. How good they are, how bad they are, how cute they are. Narratives that are rich with anecdotal evidence of the behavior of dogs, their silly acts, their seemingly loving acts, their naughty acts, their violent acts.

Rarely do these conversations address the human component. People seem to find themselves somehow exempt from any liability relating to aggressive dog behavior. There is no hesitance to take credit for a dogs’ heroism, comedic attributes or gentle nature, but don’t hesitate to assign defect to the dog for it’s dogness. The chewing, the barking, the pulling on the leash, all emotional observations peppered with “He’s just a puppy, he’ll grow outof it!” or my favorite. “He knows better, but sometimes he can be so stubborn!”

When it becomes growling, snapping, outward displays of violence, owners are convinced it’s always some external force that caused it, “He was ‘protecting’ me!”, “He doesn’t like it when I [insert act here]” or some other misguided trope that alleviates their responsibility (and maybe placate their guilt) for their dogs’ behavior, however dangerous.

Cruising random  social media outlets find such narratives resplendent with excuses as to why a dog acts a certain way, without taking into account that the owner is largely responsible for the behavior of their dog. These things don’t just materialize like apparitions out of the mists. Literally ALL dog aggression is created in the absence of genetic influence by three primary factors; dogs find themselves in situations where they feel a need to defend themselves, they learn there are no consequences for defending themselves, and finally, they learn that aggressive behavior can manipulate human behavior.

The current trend towards blaming some external force for ones actions is by no means new, but it certainly does not exonerate one of their ultimate responsibility.

It assures it when Animal Control appears on your door with a writ to seize your aggressive dog while you go through the embarrassing and expensive process of a lawsuit for the damage your dog has wrought on another human being, another animal, or another human beings’ property.

A quick analysis of my 2011 client database show 70 residency board and train clients, of which 45 dogs presented with issues related to acts of aggression. The mean average age was over 2 years, predominantly male, predominantly neutered, and predominantly mixed bred dogs acquired from shelters or rescues. Most of these dogs had a protracted history of aggressive acts (number of times aggression was observed X the length of time since the first aggressive act was observed), earliest age of onset was pre-pubescent, and present for a minimum of 6 months or more before the owners came to the realization that the behavior needed addressed. Usually as the result of an aggressive act on a family member, guest, or in one case, a police officer.

Most startling was the revelation that in almost all of these cases, the aggression appeared either shortly after acquisition (of adult dogs) or within a few months of it. In the case of dogs acquired as puppies (under the age of 6 months), owner descriptions indicate the appearance of aggressive acts at the onset of puberty, which the owners were all led to believe, would be resolved by de-sexing their animals. Using no other medium with which to address this problem, the aggression either continued  or escalated shortly thereafter desexing.

Several of these training students were court ordered by an Aggressive Dog Board hearing. Some of them were owners seeking alternatives after many other failed training attempts (either unsuccessfully on their own, or through seeking help of other professionals). Some because they finally decided it was time to address a problem that had simply diminished their dog-owning experience, permanently scarred themselves or a member of their family, or the behavior has become so bad, they were afraid that someone may be seriously injured and they would subsequently be sued.

But it all could have been resolved easier, less expensively, without risk of injury or liability, if they had come to the conclusion sooner.

Permissiveness leads to bad dog behavior. If you cannot foresee the ‘cute’ behavior of the puppy in the larger, more mature individual that pup will eventually become, perhaps a quick reflection of why youchose to add a dog to your household may be in order.

To relegate a dog to a crate, tether or kennel run, in the pervasive assumption that he will ‘outgrow’ what poor behavior he is engaging in will only lead to more heartbreak in the future.

It is never our intent to acquire a dog as an ornament, but as a companion to be enjoyed, not endured. The notion that ownership of a little dog alleviates one from their responsibility for the dogs’ behavior should be replaced with the fact that small dogs are absolutely capable of inflicting serious harm.

The responsibility for dangerous or at-risk dog behavior rests with the owners, not the dogs themselves. If you want to own a dog, any dog, regardless of size, or breed, it is imperative that you assume the mantle of that responsibility seriously.

After all, when an aggressive dog bites someone, destroys another persons’ property, attacks and or kills other animals and so on, not only is it unrepresentative of “all dogs”, it’s the responsible owner that ends up footing the bill. It’s the other insured homeowners, responsible dog owners, well cared-for and trained dogs that inevitably suffer.

Before you decide on that dog, be it a Poodle, or a Rottweiler, or a Chihuahua, or a Labrador, remember this.